It’s that special time of year again for students here in Korea.  Final exam time.  And the bi-yearly festival of putting off your studies and instead cramming for standardized tests has been in full-force.

The students were given several worksheets to help them prepare, among them were a couple of vocabulary sheets.   These sheets have between 25-30 words each and I was struck by one single idea.

The number of “Schwa [ə]” vowels was very high. Unsurprising, I know.  Because of the way English uses stress, many vowels not in a stressed syllable (which historically were [a] or [o] or something else), have “reduced” to the schwa.  As the joke goes— 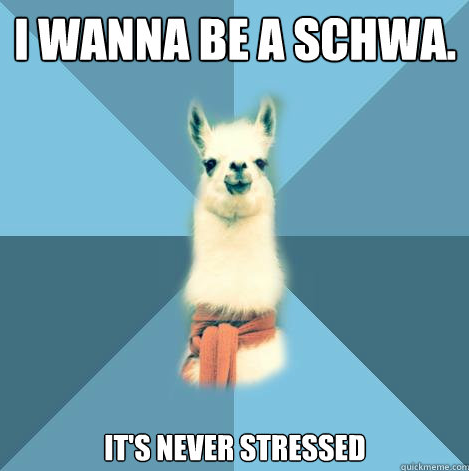 A quick look at the Schwa

I decided to quantify just how many schwas are in the vocabulary for my students.  And as it turns out, a huge portion of words my students learn, use a schwa. (complete vowel list at the end).

Out of 246 vowels (both monophthongs and diphthongs) 28% are the simple schwa.  The next highest is the lax [I] (as in ‘tip’) at 17% and then the lax [ɛ] (as in ‘edge’) at 10%. (As an aside, the [I]/[i] tense/lax pair make up 26% of the vowels in the data. For the Korean student of English, this is also a difficult vowel pair to master as they are not contrastive vowels in Korean <they are allophones in Korean>).

If we take out the diphthongs (and why wouldn’t we?), the schwa jumps to 32% of all monophthong vowels. Almost a third.  As a rule, diphthongs tend to be far more variable and less frequent.  The most common diphthong in the data was [aɪ] at 7 tokens or 3% of the total.  Monophthongs make up 86% of the vowels in the data.

It is sort of amazing to see that over 50% of all the monophthong vowels in the data are either a schwa or [I] (and 45% including the diphthongs).

Ok. Good. So we have established what everyone already knows, the schwa is really really common in English. Next, let’s look at the environments where Schwa occurs.

At university, I spent some time looking at vowels before liquids (and I spent more time looking at liquids in general for another project), and so it does not surprise me too much that over 50% of the schwas occur before a liquid segment. (Just think how common the ‘-er’ or ‘-al’ morphemes are).  Liquid segments have caused quite a bit of change across languages (the Korean liquid ‘ㄹ’ is a great example as well).  The schwa occurs before nasals at a very high rate as well, at 20%.  Together, liquids and nasals account for 71% of the segments following schwas.

This leads us to another interesting point.  That of the syllabic liquid.  Liquids are so pushy that often they take an already reduced vowel, the schwa, and push them completely out. (Sometimes I tell my students to “eat” the vowel before an [r] or [l]).  Using my own dialect, I found that I could erase about 40% of the schwas before liquids.  Whereas, the schwas before nasals, I could only skip one or two (I believe there are dialects that can syllabify nasals more easily, though I don’t know.)

Which puts us in an interesting position.  The schwa is by far the most common vowel in English, but, at least in my dialect, 28 of 69 (40%) of those schwas can be completely skipped in most situations (except, I suppose, for the most careful of speech). Of course, I am speaking from an American dialect (with that good ole, twang that the British like to talk about) and I suppose in other dialects, skipping schwas may not be so common.

All of this is interesting, for me.  But the burning question that I want answered or discovered, is how can I use this information to give my students good linguistic tools for mastering, not just English, but language. My hypothesis is that if students can be taught the rules governing stress at a basic level, they will be able to better guess when to reduce a vowel or not.

The problem I can see with actually teaching the linguistic rules of syllable structure and prosody, is that the rules governing the syllable and stress in English are more like guidelines.  I don’t know if teaching about syllable “feet” is possible at young ages.  A quick look around the ESL internet shows that while many teachers know stress is very important, but the guides to teaching or learning it are very vague.  For example, on the forum for Grammerly.com (not a great resource, in my opinion) one commenter says this,

“You must study phonetics. There are some rules about which syllable to stress. But…the rules are rather complicated! Probably the best way to learn is from experience. When you learn a new word, you should also learn its stress pattern. If you keep a vocabulary book, make a note to show which syllable is stressed. If you do not know, you can look in a dictionary.”

So, learn from experience. Ok.

I.S.P. Nation recognizes that syllable stress can be particularly problematic for Chinese (and Korean) speakers, whose languages are not stress-timed (like English) but instead are syllable-timed.  From the literature he provides, no suggestions are made to use syllable-stress rules as a tool the students can use, though he does suggest explicitly telling students why it seems so hard for them (meaning, contrasting their L1 with English) and explicitly talking about not just the stressed syllable, but also the unstressed, meaning the schwa. (90-92).

The teaching tools suggested seem to place little focus on pronunciation in general.  Nation makes it clear that it is important, but the list of activities is noticeably smaller and involves far more lecture than the activities he provides for listening/speaking.  Essentially, the gesture movements you learned in elementary school (place your hand under your chin), tapping syllables and repetition activities are all that is offered (91).

I can’t help but feel Linguistics has more to offer the ESL educator and the ESL student in identifying not only stress patterns in English, but how and when to reduce vowels.  Any further resources anyone has would be appreciated.