—   I have made note over the past few posts a desire to attempt to write on the idea of “Authority” in language.  This essay, and the one or two that will follow, will be that attempt.

It is indicative of complexity, that in the science of Linguistics  the terms “language” and “dialect” are rarely definable in a categorical way.  Linguists use many other classifications and examples to clarify just what exactly they mean when speaking in terms of either.  We speak of varieties, of codes, of families, of continuums, and perhaps these terms do clarify a little better what we mean when we talk of Language.  Some linguists make use of metaphor to help, like the phrase, often attributed to Einar Haugen that, “a dialect is a language that did not succeed”.  Phrases like this may be unnecessarily vague, but they may also be consciousness-raisers, making us consider, perhaps in new ways, just what exactly the speaker meant.

There is a very real social stigma against the use of the term “dialect” to describe any so-call “standard language”.  As Haugen points out,

“Americans are generally resentful of being told they speak ‘American dialect’” (Haugen, Studies, 498).

Such a statement could easily be said of any speakers of any dialect of English, but it most adequately applies to Standard Languages who do not view themselves as dialects at all, as is the case with American and British English.  Currently there is a similar dynamic occurring between American and Australian English, where the former is viewed as an encroaching enemy, with its influence being called, “Americanisms” (Burridge).  Regardless of how many words and phrases have already been borrowed from American English, any attempt now that is recognized as such, is unanimously denounced from the educated to the uneducated; the upper to lower classes.

While it may not be popular to say so socially or politically, every Standard Language has its beginnings as a competing dialect amongst many others. Consciously-aware or not, when the speakers feel they need a standard, all dialects are initially viable candidates  but only one is going to push its way to the front.  Many factors come together to decide which dialect will be elevated to the standard.  Usually, it is the dialect of the powerful; this can mean political, social, economic, or possibly all three.  Most usually, the dialect that is chosen is the one with a “long tradition of writing and grammatical study” (Haugen, Studies, 503).  Written languages have a prestige, perhaps because it engages the other senses, like sight, that purely oral languages seem to lack.  Thus, the community symbol of the rising standard language is often the grammar; and the community hero, the grammarian or group of grammarians, that are viewed as authorities.  For example, Samuel Johnson and his English dictionary of 1755.  And when the patriots of America wanted to show their separateness, it was Noah Webster who wrote a new dictionary, saying,

“Culture, habits and language, as well as government should be national.  America should have her own distinct from the rest of the world…” (qtd in Nunberg).

And it was Webster’s grammar that became a symbol of Americanism and Noah Webster himself as an American hero.

This nationalism is an aspect of humanity that extends far beyond the scope of language, but language does inhabit a crucial part.  In Haugen’s book, Language Conflict and Language Planning, he describes the feelings of the Norwegians when they began the process of renaming cities from Danish to Norwegian after they separated politically:

“Norwegians got a real sense of regaining their own country by bringing the distorted spellings of the Danish period back into line with local pronunciation and native linguistic history” (108).

In this instance, Norwegian, which is by many definitions still a dialect of Danish, was a dialect that “succeeded” after many years of failure.  The pushing force behind its rise from mere dialect to prestigious language was nationalism and the view by the speakers themselves that they were and are different.

Another oft-quoted apocryphal statement of Linguistics, “A language is a dialect with an army and a navy” highlights the important difference.  In the time leading up to Norway’s independence, they had been under the rule of Denmark and as linguists observe often, the speakers of the dominating or encroaching language view the speakers of the conquered area as not really all that different; that in reality, they are just dialects of the same language and should be one people.  The conquered often see things very differently and want to up-play just how different their language is.  (Almost exactly the case of Cantonese and Mandarin).  In the case of Norwegian and Danish, the differences may be very small but they mean the world to the respective peoples.    Whether or not Norwegian is factually a dialect of Danish, to the Norwegians, is not important.  What held Norwegian as a dialect of Danish for so long is not a linguistic question, but political.  Denmark had the army and the navy to prove that Norwegian was a dialect and up until the turn of the 20th century, they continued to have that power. 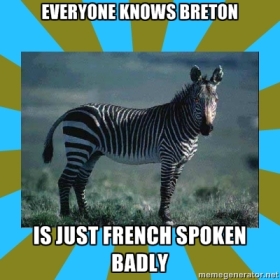 French is another example of political and linguistic power.  The French continue, to this day, to be antagonists of dialects in their geographical region, such as Breton and Provençal, among others.  The beginnings of their proactive condemnation go certainly to the French revolution and perhaps before.  “It is characteristic that the French revolutionaries passed a resolution condemning the dialects as a remnant of feudal society” (Haugen, Studies, 502).  Anything that could be tied with the old government, could be brought down, and when the revolutionaries army and navy proved stronger than the monarchy’s, the resolution took a solid place in French policy and culture.  To be French is to speak French, and only French.

These political stresses, as well as social stresses, create a distinction between linguistic have’s and have not’s.  A standard dialect is a dialect that has progressed and acquired domains, most usually in writing, of prose and science, but also politically and economically.  This creates classes of developed and underdeveloped dialects.  With the developed dialect having the most domains of use, while the underdeveloped dialects lacking in certain domains.  In order for the underdeveloped to overcome this and become relevant  the end goal seems to become relevant in the domains of science and politics (Haugen, Studies, 504).  Such a change may at first seem almost impossible, but over time, underdeveloped dialects have in the past, overcome their low status.  Examples such as Prakrit replacing Sanskrit and Latin yielding to the various romance languages give hope to the speakers of marginalized dialects (Haugen, Studies, 505).

But this change is much more subtle and slower, it may even be unnoticeable.   It is often said that there is no one place in history where one can say the transition from Latin to the Romance languages occurred, but it did happen.  What we need to focus on are the rights of speakers of minority dialects. Even in the case of Latin,  it eventually relinquished its hold on the domains of power.  And with the change, we can see that perhaps the statement, “a dialect is a language which didn’t succeed”, needs the addition of, “yet” to be complete.