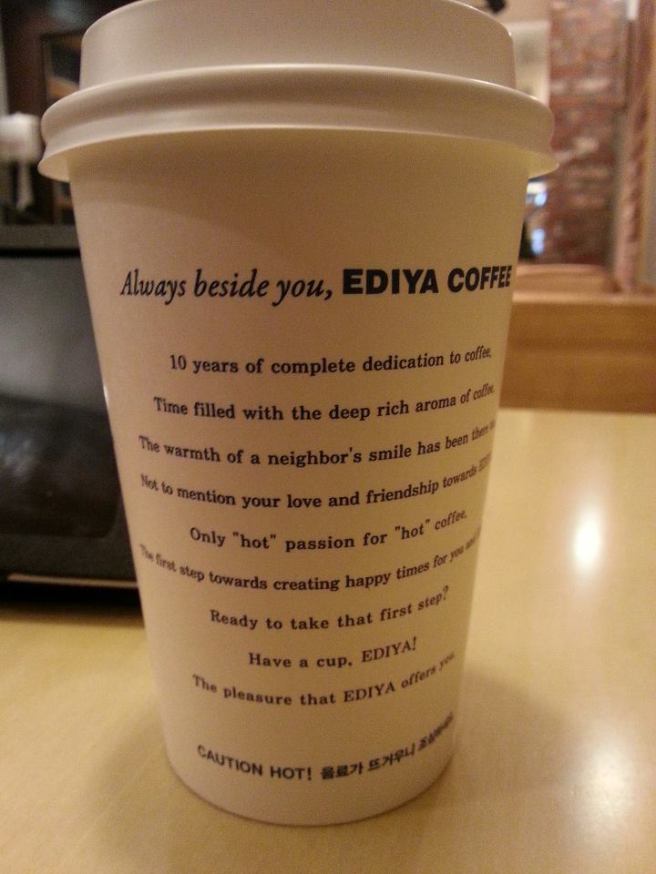 The first time I saw this cup at one of the cafés that I frequent, I nearly laughed out loud. Specifically, I am talking about the line, about half way, that says, “Only ‘hot’ passion for ‘hot’ coffee”.  Even though it’s fragmented (lacks a verb), it is a well-formed noun-phrase, so no need to get all puffy about teh grammarz.   However, the double meaning from the quotations got me thinking about what the writers may have been intending and what, depending on your dialect, may be understood.  In addition, I think there is real value in teaching para-linguistic devices like air-quotes or other conversational gestures in the ESL classroom.

One must always be careful when venturing into the world of double-entendre, as the indirectness can easily lead (logically) to misunderstanding if you do not direct the listener/reader to the correct interpretation.  (of course, vagueness may be what you are going for).  In this case, ‘hot’ has a few different potential meanings.  It can refer to temperature, sexuality, doing something very well (hot hands, in basketball), etc..

To understand how we establish meaning when more than one reading is available, certain fields of linguistics have adopted connectionism to help.  This is particularly true in the area of Speech-Error.  Most of the work in speech-error is based at the word or phonological level (switching words, or sounds, from one place to another) and a tool used is the idea of “Activation” (I like to think that Tobias Funke, who studied psycholinguistics, did his graduate work in speech-error.)

I am not well-versed in Neural Networks, Race Models and the rest of the good stuff, but I have had a rough introduction during one semester of Computational Linguistics.  Using that “rough” theme, I think the idea of activation of words and meanings can help us understand why the use of quotation and the word ‘hot’ is humorous.

Having established that ‘hot’ can refer to any number of things or ideas, our brains need a way to constrict the number of meanings down, and ultimately, to the correct one.  Context is obviously the most effective method.  For example, on its own:

It doesn’t tell us much of anything about what it means.  It could be a response to a question about the weather, or the attractiveness of another person or how well Kobe Bryant is playing tonight.  It is, on its own, optimally vague.  Introducing context gives:

Well, now, I think here it’s safe to eliminate the idea that we are talking about the weather and it may also be only a short step away from getting rid of the basketball meaning.  In my dialect, while this is still vague as to what it’s talking about (passion for what?), it’s clear that the potential meaning has been significantly restricted.  Let’s check the other noun phrase.

I suppose in 1980-90 America, “hot coffee” might reasonably activate an understanding having to do with TORT reform, but for the most part, this simple noun phrase limits the number of potential meanings perhaps even more drastically than “hot passion”.  Maybe because coffee is a physical entity, whereas passion is abstract.  In any case, ‘hot coffee’ would be prototypically given to the meaning of ‘coffee, which has the temperature of being hot’.  Let’s now put the two ideas together:

Only hot passion for hot coffee

In my reading, ‘hot passion’ loses it’s sexuality meaning with the added context of ‘hot coffee’ and we are left with an activation point  for [intensity].  ‘Hot coffee’ on the other hand, gives only an activation point to [temperature].  It is a fairly straightforward, albeit strange way of saying, “we are really into making/drinking coffee”.

(An aside:  We may wonder why the writer used ‘hot’ to describe the coffee at all, as it doesn’t really seem to play a part in the overall understanding.  Aesthetically, we may say it flows better and there is such a thing as parallelism, where we seem to like things to parallel each other.  In this case, an (adj+noun) for (adj+noun).  The repetition of ‘hot’ adds to the parallel nature.

In addition, however, we might say that the word, ‘hot’ was activated by its first use in “hot passion” and therefore was a more likely choice of descriptor for ‘coffee’, than say, ‘warm’.)

But then the writers throw a curveball and for some reason add quotations to ‘hot’.  Quotation marks serve a few functions in written language specifically, but this case is one where the quotation marks signal a para-linguistic device.  Something that is done alongside the actual language that also conveys some meaning.  In English, or at least my dialect, air-quotes serve to indicate insincerity, sarcasm or euphemism.  Simply, air-quotes indicate to the listener that I know what my words normally mean, and I don’t mean that.  And usually, I am joking around.  Now, back to the data.

If air-quotes ask the listener/reader to move passed the first meaning to the second, we might guess that here, indeed, the writer means sexual passion.  Adding the later half, first without quotes:

This noun phrase does seem to activate the sexual meaning more strongly for me than it does without the quotation marks.  However, with the context, the heightened activation still doesn’t seem to have enough power to overcome the [intensity] reading.  We may pause over the quotations, find it odd, or maybe an incorrect useage, and then move on.  Now for the final and actual phrase:

Only “hot” passion for “hot” coffee.

Before, we had said that [sexuality] had been given 1 activation point for the first ‘hot’, but also [intensity].  The second ‘hot’ only activated [temperature] (and perhaps [tort reform]).  But now, with the quotations asking us to search beyond initial meanings, we might say that ‘hot coffee’ has activated [sexuality] as well.  Giving [sexuality] 2 activation points, while the other meanings remain at 1.  In this moment of heightened activation for the sexual meaning, we may briefly understand this statement to be referring to a preference for some unspecified sexuality.  A funny statement, given the broader context, to be sure. One that might give a slight chuckle.

(Aside 2: I suppose it is relevant to add that, to many young adults such as myself, the phrase “hot coffee” already has a sexual meaning active.  You might remember a controversy over the Rockstar game Grand Theft Auto:San Andreas, which had in it a secret mini-game of explicit sexual content that went by the name of “hot coffee”.)

Nevertheless, the high activation for [sexuality] is overcome by the rest of the discourse, which is blatantly about actual, drinkable coffee.  In addition to the linguistic clues, there are non-linguistic contextual clues which also help.  The fact that I was in a coffee shop and not a brothel or more relevantly, a classroom (which would be devoid of contextual clues).   The [sexual] reading came to my mind, gave me a slight laugh, and left all within a matter of seconds.  That is truly a remarkable feat and a testament to the computational power of our linguistic systems in the human brain.  (AI systems have stereotypically notorious problems with metaphor and semantics).

As a final disclaimer, the little practice I employed here does not follow any theory that I know of.  Drawing trees and giving “points” isn’t how linguists go about doing experimental work in computational linguistics.  This is just me trying to make sense of why I laughed, there are other explanations and this one is certainly open to *a lot* of criticism.

The next question, how to teach air-quotes, or other para-linguistic features, will have to wait for another post.  I have already tried it once in an impromtu sort of way, and it was fairly successful (meaning, the students learned the usage and, even more importantly, were open to using it freely).

2 thoughts on “On metaphor, meaning and the paralinguistic”